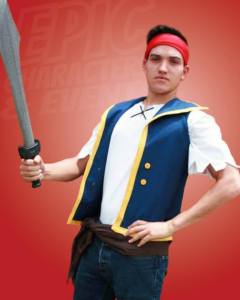 We had a client request Jake the Pirate. After googling to see what the character looked like, it seemed easy enough to accomplish. Here is a basic tutorial on how I put the costume together.

The vest was made from some stiff blue, linen-like fabric. I made the basic shape by using one of my husbands tank tops as a guideline. The vest was edged using yellow cotton edging purchasing from Walmart’s sewing section. The vest was completed with yellow buttons, two sewn to each side.

I purchased a brown scarf from Goodwill and cut the edge to give it that pirate touch. The performer simply tied it around his waist. The white undershirt was another Goodwill find. It was actually an XL underarmor shirt. I cut the edge of the sleeves in a zig zag pattern and cut out the neck line with a slit in the center of the chest. I used two black hair ties with hot glue to fix them to the top of the shirt. I cut small slits in the shirt and cut the hair ties so they would lay in one straight line. I glued on the underside of the shirt so it wouldn’t be noticeable 😉

The red headband was also purchased from a second hand store. It was a cotton scarf that I cut and frayed the edges of to look pirate worthy. Lastly, the boot covers were purchased on Amazon for $15. The performer wore his own blue jeans and brown shoes to complete the outfit.

A pirate isn’t a pirate without a sword! This sword is foam and was actually purchased from the Dollar Tree. It had a bright green handle, so I used black electrical tape (also a Dollar Tree find) to wrap the handle and give it a more neutral look.

For a last minute, low budget costume, I was quite pleased with the outcome. Have you made a ‘Jack the Pirate’ costume before? I’d love to see yours in the comments below.